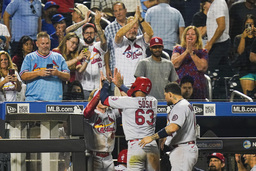 It took 11 innings Tuesday night to cap a three-month climb back into a playoff spot for the St. Louis Cardinals.

For the New York Mets, their latest one-run loss might have summarized a frustrating slide out of postseason contention.

The Cardinals will look to maintain their new standing as the leaders in the race for the second National League wild-card spot Wednesday night, when visiting St. Louis attempts to complete a sweep of the Mets in the finale of a three-game series.

The Cardinals moved into the second wild-card spot Tuesday night, when they scored three runs in the top of the 11th and held off a Mets rally in the bottom half to earn a 7-6 win.

The Cardinals were 3 1/2 games out of the second wild card as recently as Sept. 7 but have won six of seven to leapfrog the Reds, Padres and Philadelphia Phillies.

"We're looking at the windshield, not the rearview mirror," Cardinals manager Mike Shildt said. "We've been doing that anyway, quite honestly. We've just got to play our game. We still need to go out and take care of business every night."

The rearview mirror is likely filled with regretful glances for the Mets (72-74), who missed a chance Tuesday to close the gap in both the race for the second wild card and the NL East. New York trails the Cardinals by four games and the division-leading Atlanta Braves -- who lost to the Colorado Rockies on Tuesday -- by 5 1/2 games.

The Mets started August with a 4 1/2-game lead in the NL East, but they have gone 4-15 in one-run games since then.

"We've got to compete," said New York second baseman Javier Baez, who had two RBIs on Tuesday, including the game-tying solo homer in the ninth. "That's the only thing we can do right now."

Lester didn't factor into the decision Friday, when he allowed two runs on three hits over seven innings in the Cardinals' 4-2 loss to the Reds. It was the longest of Lester's eight starts with St. Louis, which acquired him from the Washington Nationals on July 31. He is 2-1 with a 4.30 ERA for the Cardinals.

Lester is 8-1 with a 3.18 ERA in 11 regular season starts against the Mets. He beat them while pitching for Washington on June 19, tossing six-plus innings of two-run ball.

Megill, who has not opposed the Cardinals in his rookie season, earned an impressive win Friday. He gave up two runs and struck out a career-best 10 over a career-high seven innings in the Mets' 10-3 victory over the New York Yankees.