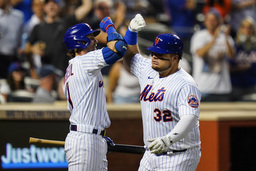 Two of the New York Mets' recent trade acquisitions have made a big difference since joining the team.

Outfielder Tyler Naquin and designated hitter Daniel Vogelbach will try to continue the momentum when the Mets host the Atlanta Braves on Friday in the second game of the five-game series.

The Mets won the series opener 6-4 on Thursday, increasing their National League East lead over the second-place Braves to 4 1/2 games. The result guaranteed the Mets will still be in first place at the end of the series. New York has won nine of its past 10 games.

"This is a lot like playoff baseball," Naquin said. "I'm thankful to be here. It's an exciting opportunity."

Naquin homered in the second and sixth innings off Atlanta's Kyle Wright, the league leader in wins. He became the first player in Mets history to have a multi-homer performance in his home debut.

"There's a lot of good players who have through the organization," Naquin said. "I came out here and the fans really made me feel at home. I'm a long way from home and they made me feel good. I'm thankful to be here, thankful for the opportunity."

Walker won his sixth straight decision on Sunday when he beat the Miami Marlins, allowing three runs on seven hits and two walks with four strikeouts in 5 2/3 innings. It ended his stretch of eight straight quality starts.

Walker is 1-1 with a 2.88 ERA five career starts against Atlanta. He hasn't faced the Braves since July 29, 2021, when he took a loss after giving up five runs in five innings.

Anderson had a much-needed bounce-back start in his last outing, against Arizona on Saturday. After allowing seven runs in his previous start against the Los Angeles Angels, Anderson pitched six scoreless innings vs. the Diamondbacks, yielding one hit and one walk while striking out nine.

"I think I had more conviction," Anderson said after the Saturday outing. "I kind of went in with the mentality of let it fly and just attack and I think that freed me up a little bit. The last few I just felt like I was trying the lay the ball, a little hesitancy. I just felt more free."

Anderson has made five career starts against the Mets, going 2-2 with a 3.42 ERA. He beat the Mets 9-2 on May 4 when he threw 5 1/3 innings and allowed one run on five hits and four walks with one strikeout.

The Braves are hopeful that the home run by Ronald Acuna Jr. on Thursday will start a trend. The right fielder's two-run shot to dead center was his first long ball since July 8.

"You never know what's going to turn a guy around," Atlanta manager Brian Snitker said. "He's been right on the verge."