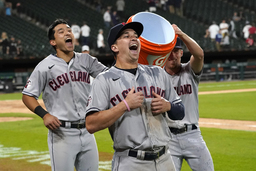 The Chicago White Sox likely needed a sweep of their three-game series against the streaking Cleveland Guardians to keep alive their flickering postseason aspirations.

After losing the first two games, the White Sox will look to avert a sweep in the series finale on Thursday night in Chicago.

"I'm not giving up. They are not giving up. The season is not over," Chicago interim manager Miguel Cairo said following Wednesday's 8-2 setback. "We still have to come and play hard. The way it's supposed to be played."

While the White Sox (76-73) are fading out of contention, the red-hot Guardians (82-67) have won 12 of their past 14 games to reduce their magic number to seven for clinching the American League Central title. First-place Cleveland resides six games ahead of second-place Chicago in the division with 13 games to play.

"Shane has such a nice feel for manipulating the ball," Guardians manager Terry Francona said. "Guys like him, they're kind of amazing, they get a ball in their hand and they can make it do different things."

Bieber isn't the only member of the Guardians heating up right now.

Rookie Steven Kwan followed up his four-hit performance in the series opener with a homer among his three hits on Wednesday. He is 14-for-26 with four RBIs and eight runs over his past five games.

Andres Gimenez had a pair of RBI singles to improve to 5-for-14 with three RBIs in his past three games.

Right-hander Johnny Cueto (7-8, 3.09) will look to keep Kwan and company in check when he takes the mound on Thursday.

Cueto, who boasts a 5-0 record with a 2.14 ERA in nine career encounters against Cleveland, was scratched from his last scheduled start due to a non-COVID illness. His last trip to the mound resulted in his third loss in four starts, as he permitted seven runs (five earned) on eight hits in 4 2/3 innings of a 10-3 setback at Oakland on Sept. 11.

"This is a playoff-type series for us," Cueto said through an interpreter.

Chicago's Luis Robert is considered day-to-day with left hand soreness. He is mired in a 1-for-28 stretch at the plate, however.