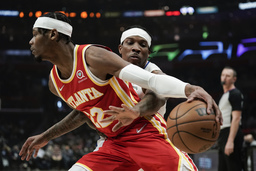 The Hawks also sent forward Solomon Hill and a 2025 second-round pick to the Knicks. Small forward Kevin Knox is heading to Atlanta.

The trade comes as the Hawks (17-23) have lost three consecutive games, and seven of their last nine. Wednesday night's 115-91 loss to Miami was the Hawks' ninth consecutive home loss. Atlanta has fallen to 12th in the Eastern Conference standings one year after advancing to the conference finals.

Reddish did not play against the Heat due to a right ankle sprain.

The Hawks, who visit Miami on Friday night, must regroup quickly if they are to return to the playoffs.

Coach Nate McMillan said the Hawks are not giving up on the season.

McMillan and the Hawks are trying to reclaim their cohesiveness, especially on defense. They have been forced to play through a series of lineup changes, in part caused by COVID-19 positive tests that most recently caused McMillan to miss four games. McMillan returned Wednesday.

"You can't have one guy not locked into what you're supposed to be doing out on the floor," McMillan said Thursday. "Those are the things we are trying to build, that chemistry, that connection defensively and that connection on the opposite end of the floor."

Reddish, the No. 10 overall pick in the 2019 draft, is averaging 11.9 points and 2.5 rebounds in 34 games, including seven starts, this season. Injuries have hurt his consistency and production, but he is regarded as a player with high potential thanks to his athleticism and defense.

At New York, Reddish will be reunited with former Duke teammate RJ Barrett.

The first-round pick sent to Atlanta was acquired by the Knicks from Charlotte.

The Hawks dealt from a team strength with depth on the wing, especially with Wednesday night's return of De'Andre Hunter following wrist surgery. Knox will compete for a rotation spot behind Hunter, Bogdan Bogdanovich and Kevin Huerter.

"We have to be more together now than we have really at any point," Huerter said Thursday. "We're hitting a low point. Hopefully the low point was last night. We're not going to continue to let it snowball.

Hunter scored 15 points in 24 minutes in his return from wrist surgery. Hunter's strong showing after missing two months provided encouragement he is ready to resume his role as the starting small forward.

"It was good to get him back out on the floor and get some live minutes with the team," McMillan said, adding Hunter had no setbacks and participated in Thursday's practice.

Knox was the ninth overall pick in the 2018 draft. After starting 57 games as a rookie, he fell out of favor and has only four starts in the last three seasons.

Hill, 30, was a 2013 first-round pick by Indiana. He is expected to miss the remainder of the season after tearing his right hamstring against Charlotte on Dec. 5. Hill averaged 4.5 points and 3.0 rebounds in 71 games, including 16 starts, for Atlanta last season.