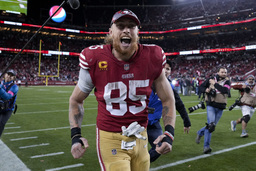 The league on Wednesday announced the finalists for the 12th annual award. It's designated for exceptional effort to honor and support members of the military community. The winner will be announced at the NFL Honors ceremony on Feb. 9 in Phoenix along with the rest of the on-field performance awards.

Award sponsor USAA will contribute $25,000 in the recipient's honor to the official aid societies representing each of the military branches, and the NFL will donate $25,000 to the recipient's military charity of choice. Finalists were determined by a consensus vote of fans, an NFL internal committee and USAA.