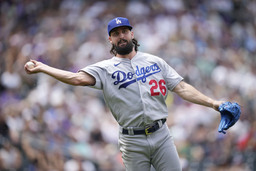 The last time the Kansas City Royals faced the Los Angeles Dodgers, in 2017, 21 of the 26 players currently on the Royals active roster had not yet made their major league debut.

Most were still in college or in the minors, while Bobby Witt Jr. was preparing for his junior year in high school.

The Dodgers and Royals begin a three-game series Friday night in Kansas City. The Dodgers will start right-hander Tony Gonsolin (13-1, 2.30 ERA), while the Royals will counter with lefty Daniel Lynch (4-7, 4.79).

The Dodgers had Thursday off, while the Royals defeated the visiting Chicago White Sox 5-3.

The Royals are 11-10 since the All-Star break. They took three of four games from the White Sox, after also taking three of four from the visiting Boston Red Sox. It was the first time since 2014 that the Royals have won back-to-back four-game series.

"Winning three out of four is tough," Royals manager Mike Matheny said. "We just had two good teams that we were able to do that against.

"We break it down to what's controllable. Focus on today. Any time you can win a series is big, but we're going to continue to focus on today," Matheny said.

Lynch has struggled with control this year. He has surrendered 33 walks in 82 2/3 innings. But in his last four starts, he has issued just three walks in 19 innings. He gave up four runs on seven hits in six innings in a no-decision against Boston, but with no walks.

The Royals' recent success is coming with contributions from young players, as seven different players on the active roster have made their debut in 2022. Despite their youth, they're not intimidated about playing the team with the best record in baseball.

"We have one of the best teams in baseball coming in tomorrow night. They're not going to scare us. We're not going to be intimidated because the Dodgers are coming to town," Pasquantino said Thursday. "We're ready to play them. I'm not guaranteeing a win or anything like that, but I'm going to guarantee that we're going to compete our tails off for three games and see what happens."

They would be well-served to come in confident as the Dodgers are riding a 10-game winning streak.

Los Angeles has the best record in baseball by five games. With a 16-game lead over the San Diego Padres, the Dodgers can spend the remainder of the regular season getting ready for the postseason.

Despite his gaudy numbers, Gonsolin, a first-time All-Star this season, actually went through a rough stretch recently. He gave up 12 earned runs in 16 innings, including four in six innings in his only loss of the season, a 4-1 loss to the visiting Washington Nationals.

In his last start, however, he was back in form. He allowed no runs on three hits in five innings in a victory over the Padres.

The key for Gonsolin is his diversity.

"At the end of the day, he has four pitches that are above average that he can throw for strikes anytime," teammate Clayton Kershaw told The Athletic. "He's done that. When it's 2-0, you don't know what he's going to throw. That's what makes him so challenging. The pitches themselves are really good. The splitter, the slider, the curveball, they're all really good. When he needs it, he can rear back for 95, too."