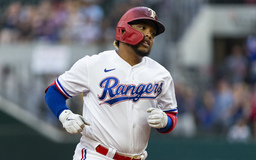 ARLINGTON, Texas (AP) The San Francisco Giants have acquired outfielder Willie Calhoun, who was the main return for the Texas Rangers when they traded All-Star pitcher Yu Darvish five years ago.

Calhoun was traded by Texas to the Giants for Steven Duggar on Thursday in a swap of outfielders who both bat left-handed and throw right-handed.

It will be a homecoming for Calhoun, who requested a trade a couple of days after being sent to the minors by the Rangers on May 1. The 27-year-old was born in the East Bay city of Vallejo, California, and attended Benicia High School.

"We wish Willie the best in his opportunity with San Francisco," Rangers president Jon Daniels said. "It's a fresh start for him, as well as being close to home."

Calhoun has spent all five-plus years of his major league career with the Rangers, playing 253 games and hitting .241 overall. He had a .136 average with a homer and two RBIs over 18 big league games this year. Just more than a month after he was optioned to Triple-A, he was designated for assignment and cleared waivers before being assigned outright to Round Rock, where he hit .217 with five homers in 22 games.

Right-hander Spencer Patton was designated for assignment by Texas to make room on its 40-man roster for Duggar, but the Giants didn't add Calhoun to their 40-man roster. Duggar, 28, was activated from the 60-day injured list and the Rangers will need to make another move to add him to their 26-man roster when he joins the team.

The Rangers got Calhoun, pitcher A.J. Alexy and infielder Brendon Davis when they traded Darvish, then a four-time All-Star for Texas, to the Los Angeles Dodgers in a deadline deal on July 31, 2017.

But he suffered a broken jaw during spring training 2020 when hit by a pitch and played only 29 games in the season delayed and shortened by the pandemic. His 2021 season ended in June when he was hit by a pitch that fractured his left forearm.

Duggar batted .194 with four RBIs in 12 games for the Giants this year before being placed on the injured list April 22 because of a left oblique strain.

Daniels described Duggar as "a strong all-around baseball player who can add value to the team in a variety of ways." His skill set is similar to speedy outfielder Eli White, who is on the 60-day IL with a right wrist fracture from an outfield collision on June 12.

White and Duggar were teammates at Clemson for two seasons before the Giants took Duggar in the sixth round of the 2015 amateur draft.

Duggar has made big league appearances with San Francisco in each season since his debut in 2017. He has hit .242 with 14 homers, 87 RBIs and 18 stolen bases in his 254 MLB games. He has started at all three outfield positions, primarily in center.