Bucks, Celtics move on to an emotional Game 7 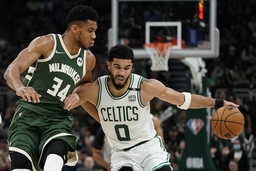 While the city of Milwaukee works through the aftermath of separate downtown shootings following Game 6 of the Eastern Conference semifinals between the Bucks and Celtics, the series is expected to resume at Boston on Sunday for an emotional Game 7.

The Celtics will be on their home court for the series finale, but the visiting Bucks will not be deterred. The visiting team has prevailed in four of the first six games of the 3-3 series, with the Bucks winning Games 1 and 5 in Boston.

The defending-champion Bucks have never trailed in the series, winning each time the best-of-seven matchup was tied, before losing every time in the meeting immediately after having taken a one-game advantage.

The last time the clubs met in Boston, it took a Bobby Portis putback off a Giannis Antetokounmpo missed free throw and a Jrue Holiday blocked shot to deliver the third-seeded Bucks a 110-107 victory in Game 5. Antetokounmpo had 40 points in the win.

The Milwaukee star poured in 44 points with 20 rebounds in a potential series-clincher on Friday, but was upstaged by Jayson Tatum's 46 points and the Celtics' more productive supporting cast, which included Jaylen Brown's 22 points and Marcus Smart's 21, in a 108-95 Boston road win.

Afterward, chaos unfolded in the streets near the arena in the downtown bar district. As of Saturday afternoon, 21 people were reported injured in three shootings near the Bucks' outdoor viewing party that drew more than 11,000 spectators Friday night. There were another 17,681 fans inside the arena.

The Milwaukee Journal Sentinel reported the victims ranged in age from 15 to 47, and all were expected to survive. As of mid-day Saturday, Milwaukee police had arested 10 people, including some juveniles, and recovered nine guns.

As the series moves into the brightest of lights Sunday and the focus diverts to basketball, at least for the late afternoon, all eyes will be on the Bucks' Antetokounmpo and the Celtics' Tatum.

"That's why he gets paid the big bucks," Smart said of Tatum, who was 7 of 15 on 3-pointers to account for nearly half his points. "That's it, right there, for moments like that. I was telling him the whole game, 'Just be you, man,' and he was."

The keys to success through six games are now well established.

The Bucks have shot 32.3 percent on 3-pointers in their wins, but just 25.7 percent in their losses. Jrue Holiday has defined the disparity, going 10 of 22 from deep in the wins, 5 of 22 in the losses.

"We have to find a way to get up more 3s and make more 3s," Holiday said after Game 6. "They switch everything, and they try to make you play one-on-one. That makes it a little tougher for 3s.

"I'm not saying that they're not there, but it just makes it tougher. So I think just moving the ball a little bit more, moving bodies, getting defensive stops, and then pushing in transition, that's usually how we get a bulk of our 3s."

The Bucks also have 52.0 rebounds per game in their victories to the Celtics' 43.7. In the loses, though, Milwaukee averaged only 44.7 rebounds. Portis and Brook Lopez have contributed 56 rebounds to the Bucks' wins, but just 40 to the defeats.

Antetokounmpo (35.3 points per game) has outplayed Tatum (28.3) over the course of the series, but the Celtics have gotten timely contributions from Brown, Smart and Al Horford, as well as sturdy defense from Grant Williams, to get the better of the play of the supporting casts.

The Bucks have the better recent history in Game 7s. They outlasted the Brooklyn Nets in seven games at this point last year en route to the title.

But when the clubs met in a Game 7 in the first round in 2018, the Celtics prevailed easily 112-96, with Antetokounmpo (22) and Tatum (20) playing on basically even terms. Horford played the role of the difference-maker in that one, hitting 13 of 17 shots on a 26-point night.

"I remember 2018, yes, 2018; we went to Boston in a Game 7. Didn't have the best game possible," Antetokounmpo said. "But you learn from it. You learn what the atmosphere is like when the ball gets heavy.

"We're going to be better. So for me: Just go out and play free. Be fearless. Play free. We don't owe nobody nothing."