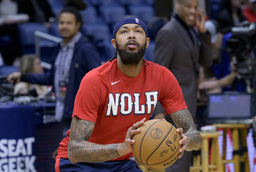 NEW ORLEANS (AP) Brandon Ingram dribbled with his back to the basket near the baseline, then suddenly rose from the court in a spinning motion as he let fly a turnaround fade.

Twice, Ingram made shots like that in what was his first game in two months. In between, however, there were many misses.

Ingram scored 13 points in his first game since Nov. 25. But after missing 29 games since then, his shooting was inconsistent at best. He made just four of 18 shots and missed all six 3-pointers he attempted against the Minnesota Timberwolves, who outlasted the Pelicans 111-102 on Wednesday night.

"I was anxious to get out there today. I felt a lot of emotions coming in," Ingram said. "Just excitement to play. It's been a while.

"I'll be fine. I don't think it'll be too many games before I'm myself," Ingram added. "Nights like this is only good motivation."

Ingram, who also had five assists, five rebounds and a steal, said he still is not entirely pain-free.

"There's going to be some pain, but it's tolerable," Ingram said. "Hopefully it goes away completely ... but I'm able to play through it."

Ingram's minutes were limited. He played less than 26 minutes, or about nine minutes less than guard CJ McCollum.

"I know it's all a part of the process of trying to get me back safe," Ingram said, even has he said he wished he could have played more. "Hopefully we can get through this and I can get back to who I am."

Ingram averaged 20.8 points during his first 15 games this season when he was hitting 3s at a nearly 47% clip.

"It was great to have him back. Would have been nice to get a win for him," McCollum said. "Obviously he's getting his wind back. Two months without basketball is a long time."

In the 12 games Williamson has missed, New Orleans has lost nine times, including six straight.

The Pelicans said Tuesday that while Williamson's rehabilitation has progressed well, his return to on-court practice will be limited and he's expected to be out for at least another two weeks.

Williamson has averaged 26 points in 29 games.

Ingram's return "definitely makes the game easier for myself along with everybody," McCollum said, noting that Ingram draws considerable attention from opponents' top defenders.

"Quality shots turn into quality nights and more efficient nights," McCollum added. "The key is just continue to help each other and help our team."