Rangers attempt to conclude comeback in Game 7 vs. Penguins 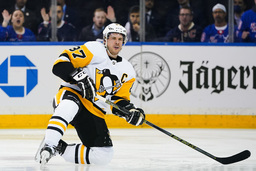 The New York Rangers exceeded expectations during a spectacular regular season and highlighted one of the best seasons in team history by earning 54 of their 110 points via 27 comeback wins.

The ability to rally also earned New York the coveted home-ice advantage in the first round for Sunday's Game 7 and following a pair of comebacks, the Rangers look to complete their rally in their series with the Pittsburgh Penguins.

The Rangers are attempting to overcome a 3-1 series deficit for the third time in team history. They did it in second round series against Pittsburgh in 2014 when they won a Game 7 on the road and versus the Washington Capitals in 2015 in overtime on home ice.

New York has an opportunity to complete another comeback after evening the series with a 5-3 win on Friday. The Rangers led for a combined 4:20 by rallying from a two-goal deficit with three goals in the second period and snapping a 3-3 tie when Chris Kreider's slap shot deflected off Pittsburgh goalie Louie Dominque and trickled into the net with 1:28 remaining.

Kreider also scored the tying goal on a power play after Mike Zibanejad scored his first two goals of the series in a span of 1:16 in the second period. Kreider's first goal was answered by Evgeni Malkin's third tally of the series.

New York has stayed alive by rallying from a pair of 2-0 deficits and withstanding fast starts by the Penguins, who have scored nine times in the first period.

On Friday, The Penguins held a two-goal lead when Jeff Carter and Bryan Rust scored in a span of 96 seconds late in the first. Pittsburgh also held a two-goal lead in Game 5 when Jake Guentzel and Kris Letang scored in the opening 27:58 but those goals were scored before Crosby was injured on a high hit by New York defenseman Jacob Trouba with about seven minutes left in the second period.

Crosby has an upper-body injury and it is believed to be a concussion for the star forward, who has missed 108 regular-season games and one playoff game with previous concussions. Crosby had two goals and seven assists on Pittsburgh's top line through the first four games.

Crosby did not skate ahead of Game 6 before being ruled out. He also did not participate in Sunday's optional morning skate, however Jarry did as he attempts to work his way past a foot injury.

"I believe in this group," Sullivan said. "I think we have what it takes to win regardless of who's in our lineup. I know we're very capable."

The Penguins are hoping to avoid blowing a 3-1 series lead for the fourth time in team history.

Besides the 2014 collapse against the Rangers, Pittsburgh blew a 3-1 lead in the 2011 first-round against the Tampa Bay Lightning when Crosby missed the entire series and the 1975 quarterfinals against the New York Islanders, when the Penguins lost the last four games.

They are also hoping to avoid some of the penalty issues that enabled the Rangers to pull off another comeback. The Penguins held the Rangers to 2-for-9 on the power play in the first four games but New York is 3-for-6 on the man advantage in the past two games and penalties by Evan Rodrigues and Mike Matheson led to Zibanejad's first goal and Kreider's tying goal.

"Nobody said it was going to be easy," Letang said. "They're a really good team. They have a lot of skilled players that can score goals. It's a race to four and we have to regroup, stay positive and get the job done."